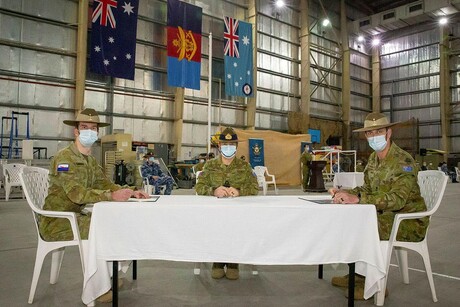 The responsibility for Australian Defence Force (ADF) communications in the Middle East has been transferred from one unit to another.

Major Tomlinson said he was grateful for the opportunity presented to TCE-1 to enable JTF633’s command and control of the ADF’s operations in the region.

“TCE-1 has had an extremely rewarding and productive six months providing communications and information systems to JTF633,” Major Tomlinson said.

“We leave here as a proud triservice unit that delivered a unique mix of capabilities that enabled operations and overcame a pandemic to maintain a level of connectivity that could only be surpassed by face-to-face contact.”

TCE-1’s transfer of responsibilities to MSU-C recognises a new force structure because the formerly independent element now falls under the overarching support unit.

The capabilities provided by the theatre communications specialists remain the same.

“The services and support which have defined previous communications groups and elements, particularly TCE-1, are very much at the heart of MSU-C,” Major Watch said.

“The name and our place in the organisational structure may have changed, but if you scratch below the surface, you will find we are very much the same highly proficient and reliable communications capability that has supported nearly two decades of ADF operations in the Middle East.”