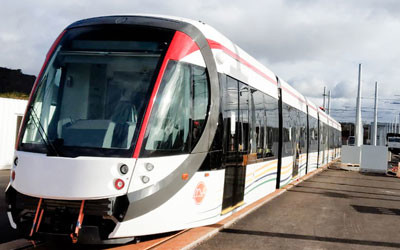 The Light Rail-based Urban Transit System — which will initially run for 13 km from Port Louis to Rose Hill — is said to be Mauritius’s “first and only mass transit system” and will operate with the help of DAMM’s TetraFlex network, comprising outdoor TETRA base stations and control room applications.

According to DAMM, the network will enable the transit system’s operational control centre to monitor dispatches and integration to PBX or a central data recording system. It will also handle voice and data communication through third-party handheld terminals, as well as a train radio solution from DAMM’s systems partner, Consort Digital. DAMM said its communication infrastructure enables integration with an onboard automatic vehicle location (AVL) solution.

“DAMM’s BS421 outdoor system was chosen due to its compact design and the limited space for installation along the track and at the light rail vehicle (LRV) station. Additionally, the open API made integration to equipment and solutions from other vendors really simple and flexible,” Consort Digital Director Devdarsh Jain said.

“Another major deciding factor was the proven reliability of DAMM’s outdoor system in several metro projects, as reliability is critical in the transport sector,” he added.

DAMM’s TetraFlex network has previously been installed along city tram lines in Cochabambama, Bolivia, and in the Nagpur Metro Rail Project.

The Mauritius metro’s second and final phase is planned for 2021 and will connect 26 km from Curepipe to Immigration Square.