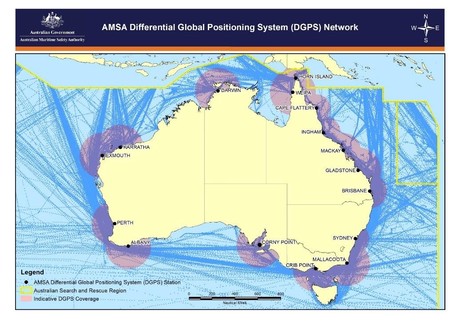 The Australian Maritime Safety Authority (AMSA) has outlined the feedback it has received regarding the pending discontinuation of Australia’s differential global positioning system (DGPS).

It also has outlined steps that can be taken by DGPS users to move to alternate positioning system arrangements which, it says, will result in improved service.

According to the AMSA website, “DGPS is a ground-based GPS augmentation system, operating in the 285 to 325 kHz frequency range. It was introduced in the 1990s, to improve the accuracy and integrity of GPS information for ships navigating off the coast of Australia.

“A network of 16 DGPS stations … each with a reference unit that generates corrections and provides integrity monitoring for GPS signals, makes up AMSA’s DGPS service. Their location was chosen based on the volume of traffic and degree of risk.”

The stations compute the difference between the stations’ accurately known position and GPS-provided position and provide users within range of the DGPS radio beacon the ‘differential’ amount, thereby enabling shipboard receivers to improve positional accuracy to better than 10 metres.

However, the nature of the signal means that its range is limited and does not cover all of Australia’s coastal waters or the EEZ.

AMSA called for feedback from industry and users regarding the pending discontinuation. Only four submissions expressing concern were made — you can read them here.

Full details of the DGPS and its impending withdrawal can be found on the AMSA website.