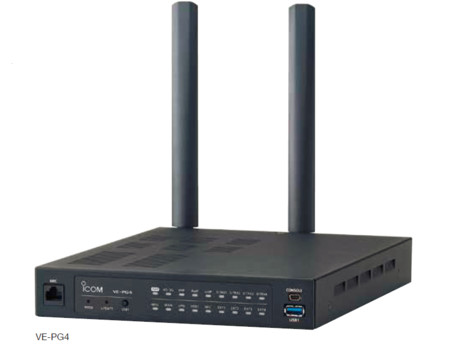 At the recent Comms Connect Melbourne 2018 event, Icom (Australia) showcased a number of new demonstration units that we are working to bring out in the coming months. These ranged from our new mobile LTE unit to dual sim LTE hand held to our Satellite Transceiver.

One of the units on show that attracted a lot of questions and attention was our preview VE-PG4 RoIP (Radio over IP) Gateway unit. Many visitors to our booth asked what the differences were between this and the current VE-PG3 model.

The VE-PG4 is designed to provide a seamless communication solution over IP Gateway Linking Various Radio Systems and Protocols with LTE and IP Networks. This would allow users to interconnect various communications systems without limitations imposed by distance, security or technology.

The VE-PG4 offers a range of features which will include:

The VE-PG4 functions as a bridge for radio network audio to an IP protocol (VoIP) and then interconnects this between those various devices on the network.

One of many of the great features of Icom’s VE-PG4 is its ability to integrate digital and analogue devices with SIP and analogue telephone systems as the unit has built in RoIP, SIP gateway, IP router and IP PBX features.

Types of connections through the unit include:

Examples of these functions in action are:

The number of probable applications that this unit could offer are limitless. We are aiming to have this product available in the coming months. If you would like to talk to us about your project please feel free to contact us on sales@icom.net.au.

[i] A SIM card is required for this function.

[1] A USB is required separately.

A cost-effective, simple solution for events, festivals and large organisations, enhancing the...