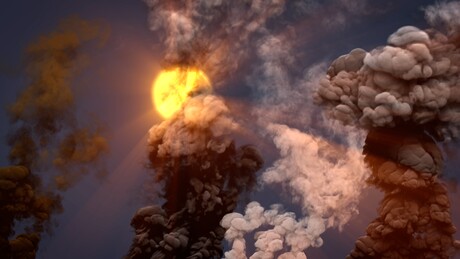 How to choose low-smoke, halogen-free cabling to protect life, technology and vital private and public infrastructure.

While halogen-free wires and cables have been widely used in Europe for some time, they are now starting to gain relevance further afield in places such as the United States and Australia.

Products containing halogen, such as wires and cables, conduits, routing ducts and more, are receiving attention domestically due to the negative effects they impose on both industrial workers and machinery. Plus the push to reduce halogen usage is now reflected in UL and other domestic safety standards.

In the event of a fire, halogenated wires and cables give off toxic fumes that can cause serious health concerns if inhaled, not to mention they also destroy expensive electronic equipment. As industrial companies become more conscious of these problems, they have begun taking a closer look at the benefits of halogen-free cables.

Here is a guide to some places where it makes sense to use halogen-free cables and why you might want to consider them over halogenated cables in many applications.

Halogen-free wires and cables are used in various petrochemical, transportation, utility, electronic and semiconductor applications. Since halogen-free wires and cables do not produce toxic corrosive gases in fires, they help minimise damage to electronic equipment and are not threatening to workers in surrounding areas. On the other hand, proponents of halogenated cables believe that there would not be any safety issue as long as the installed cables met the required smoke and flame resistance requirements.

However, keep in mind that while it sometimes makes sense to use halogenated cables, ingesting their fumes can be harmful to human life.

In the wire and cable industry, there are three main halogenated elements: fluorine, chlorine and bromine, which are found in various types of cable insulation and jacketing compounds (see Table 1).

Fluorine is present in varying amounts of certain high temperature compounds, such as fluorinated ethylene propylene (FEP Teflon) and polyvinylidene fluoride (Kynar). Chlorine is a component part of polyvinyl chloride (PVC). And bromine is often used as part of the flame retardant package used in thermoplastic cable insulating compounds.

In addition to the carbon monoxide they release while burning, these three material categories also release additional toxic gases that are dangerous for humans to ingest. Carbon monoxide itself can be lethal, but if you add either hydrofluoric or hydrochloric acid to these fumes, you get an even more dangerous combination. Your digital circuitry can also be irreversibly damaged.

During a fire, components containing halogen wires and cables emit both smoke and toxic fumes that, when combined with moisture, become hazardous. Up to 80 per cent of all deaths from fire come from inhaling toxic fumes and smoke (see Table 2).

These fumes are acid gases — such as hydrobromic, hydrochloric and hydrofluoric — that can cause severe damage to body parts. They are also known to cause confusion and disorientation, which can prevent victims from finding safe escape routes.

From the viewpoint of expensive electronic and electrical equipment, these corrosive fumes also attack and degrade sensitive components. The damage from these fumes can cause component malfunction and make the equipment inoperable.

When looking at the differences between halogenated and halogen-free cables, another factor to consider is smoke, which can also cause fatalities and extensive damages to property and expensive electronic equipment. The UL 1685 smoke test performance chart shows the results of smoke release testing done per UL Standard 1685 during FT4 cable burns with different insulation and jacket combinations (see Figure 1). 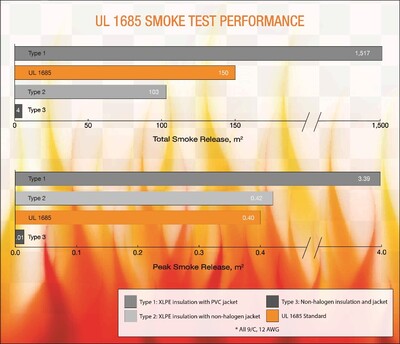 While the results in Type 2 show a significant improvement when compared to Type 1, the peak Type 3 indicates full compliance with these requirements. The resulting data confirms that using a halogen-free insulation and jacket results in less smoke release during a fire than a halogen insulated wire and cable.

With all this in mind, there are still some times where halogenated components are the right choice. Using these components is a cheaper way to give thermoplastic cables the properties to guarantee performance characteristics of the insulating compound.

Take polyvinyl chloride (PVC), for example; containing chlorine and produced at a low cost, PVC provides the electrical, mechanical and physical characteristics necessary to fulfil industry performance requirements. The source of chlorine in the PVC comes from two inexpensive commodities: water and salt. Since these raw materials are available in abundance and achieve the desired properties, it is not hard to understand why PVC is the primary insulation choice in today’s wire and cable industries.

In short, PVC provides product performance required by UL, CSA and Intertek at a much lower cost than halogen-free insulations and jackets.

A number of industry standards evaluate the cable fume toxicity produced during a fire. Each standard is unique because they approach the subject of determining cable fume toxicity through different evaluation parameters. They are used to quantify smoke levels, light transmittance, levels of acid gas, concentration levels of toxic gases and halogen content.

While these standards are all different, and may vary in detail from local standards, they are used to provide some determination concerning halogen-free or low smoke zero halogen cable requirements:

IEC 60754-1 details the amount of halogen acid gas measured from a specified amount of raw material. This test is not performed in the finished product wire or cable form and compliance comes from not exceeding the mg/g that is specified within the standard.

IEC 60754-2 shows the pH levels to determine the poisonousness of the gases during a fire. This standard approaches acidic levels that arise when halogenated components are burned and react with the moisture in the air.

IEC 61034-2 concerns the amount of light you can transmit while testing, to determine the smoke density generated during a fire. High numbers show the effectiveness that a lighted pathway creates in a smoke-filled area.

NES 713 Part 3 determines the toxicity index of materials through complete combustion methods and analysis of the emitted gases. Measured in parts per million, the gases must follow the highest values indicated, while concentration levels should not exceed the amounts for the 14 specified gases.

UL 1685 involves both the flame spread and fire resistance of cables, as well as methods for measuring smoke release. It establishes some pass/fail criteria, especially in the areas of peak and total smoke release. Lower numbers are desirable here, signifying the amount of smoke released.

MIL-DTL-24643 approaches the cumulative total contents of halogens in a cable by using X-ray fluorescence to determine amounts, giving an overall amount of concentration of halogen levels in a cable. Levels should not exceed the critical point of 0.2% under this standard specification for shipboard use.

The following three examples are times when corrosion and toxic fumes emitted by halogenated materials during a fire have contributed to human fatalities and the destruction of equipment.

A subway station fire took place in 2003 in Daegu, South Korea with intense toxic fumes and heavy black smoke preventing firefighters from quickly rescuing the people who were trapped. Almost 200 people were killed at this event and another 150 injured. While it was deemed that inadequate emergency equipment did not help lessen the disaster, the use of PVC cables in the trains and subway station didn’t help the situation either.

In 1996, a fire at the Dusseldorf Airport in Germany led to 17 deaths and 72 injuries when toxic fumes rapidly spread from smouldered PVC-covered cables in a cable ventilation shaft, emitting cyanide, chloride, dioxin and carbon monoxide into the air.

The Illinois Bell office in Hinsdale, Illinois, experienced a fire in 1988 that remains the worst disaster in telecommunications history. Corrosion and toxic fumes caused equipment destruction and loss of human life. The recovery costs were estimated to be several million dollars and about 35,000 Chicago customers were without service. 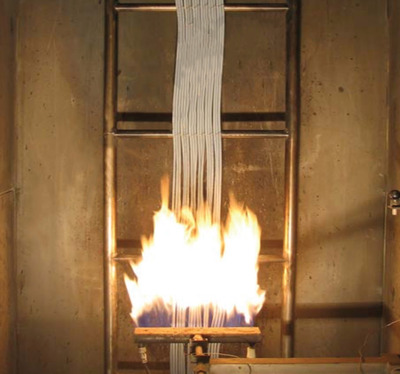 Since it’s filled with low smoke, this flame chamber has full visibility. 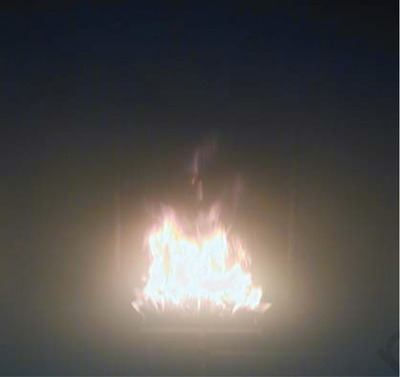 There is zero visibility in this flame chamber because it’s filled with smoke.

Choosing between halogenated and halogen-free cables can be confusing. But just remember that if your application requires a high efficiency cable that performs well in NFPA flame testing, halogenated cables are a suitable choice. If you are looking for a cable that is safer for your workers and machinery, you will want to go with a halogen-free cable.