A trans-Tasman contract for new satellite ground stations and a new mission control centre will provide a major boost to the region’s search and rescue capability.

Maritime New Zealand (MNZ) and the Australian Maritime Safety Authority (AMSA) have signed a contract that will provide a major boost to search and rescue (SAR) in the region.

The contract with McMurdo Group’s Techno-Sciences Inc will improve the way emergency distress beacon signals are picked up and passed on to rescue authorities.

Two new satellite receiving stations will be built, one near Taupo in New Zealand and the other in Western Australia, along with a new mission control centre in Canberra, to pick up signals from Medium-altitude Earth Orbit Search And Rescue (MEOSAR) satellites. 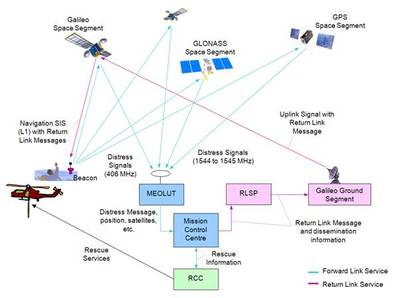 Existing beacons, of which there are 46,000 registered in New Zealand, will not be affected by the change.

Six satellite dishes will be built at the New Zealand site, located mid-way between Taupo and Rotorua, with construction scheduled to be completed by the end of 2015. The receiving station is expected to be commissioned towards the end of 2016 and operational by 2017.

The New Zealand contract is made up of NZ$7.2m for construction of the receiving station and NZ$5.5m in operating costs over the next 11 years.

There are currently 16 MEOSAR satellites orbiting Earth, compared to five LEOSAR satellites, meaning beacon signals will be received more quickly and beacon locations identified with greater accuracy. This will further improve over the next five years as the number of MEOSAR satellites is expected to increase to more than 50, ensuring several satellites will be in view at all times from anywhere on Earth.

As with the LEOSAR system, beacon signals will be passed through the MEOSAR satellites to the two ground stations, processed through the Canberra mission control centre and relayed to the Rescue Coordination Centre New Zealand (RCCNZ), thus triggering SAR operations. The RCCNZ, part of MNZ, responds to around 550 beacon alerts each year.

“The joint investment by New Zealand and Australia in the MEOSAR project is another example of the close cooperation between our two countries in what is a vital area of operations,” MNZ Director Keith Manch said.

“The change is necessary because without a medium Earth orbiting receiving station, New Zealand would effectively lose its ability to respond to distress beacons once the LEOSAR satellites are phased out. But the change brings with it significant improvements to search and rescue capability.”

“This offers a high degree of resilience in the event of a system outage that would be expensive for either country to achieve alone,” Kinley said. “AMSA is pleased to continue this collaborative regional approach with New Zealand.”

New Zealand’s search and rescue region extends from just below the equator to the South Pole, halfway across the Tasman, and east to halfway to South America.